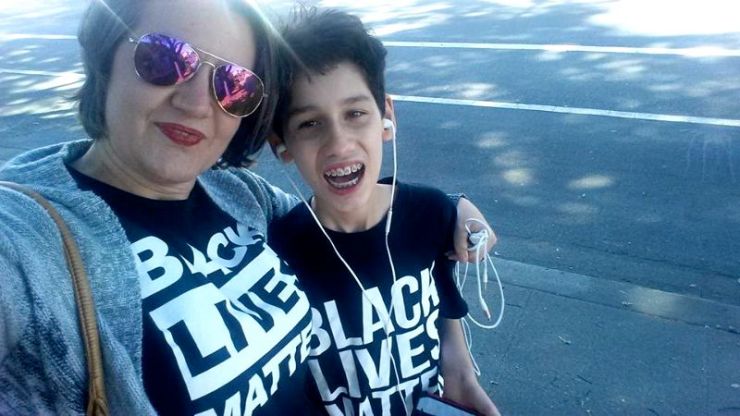 We are that family with a Black Lives Matter yard sign in front of our house and a bumper sticker on our car. So when the Wear Out the Silence campaign launched last month, asking white folks to wear BLM shirts on Fridays as a way of sparking important conversations and refusing to be silent and complicit about police brutality, you know I was getting t-shirts, too. White people don’t have to think about race all the time, we can just go about our regular routines telling ourselves that bad things happen to other people. But wearing the Black Lives Matter message across your chest forces you to be aware of race–and ready to talk about it–all day long. So when our shirts arrived, I had visions of us all leaving the house in them together, ready to walk the talk. That hasn’t quite happened.

I am white, my husband is Mexican, and we have two teenage boys. They are half-Latino, but they have enough white privilege that I don’t have to worry about them being stopped by police when they walk around our neighborhood, and they know that some of their friends are living a different reality. We talk about how it’s not fair, how we can speak out about that injustice, how we can act and react and support each other, what we can do to try to change things.

I have only recently, in the last couple of years, started to educate myself about racial justice. After Trayvon Martin and even Michael Brown, I mostly remained silent, not sure if it was my place to to say or do anything. A few good friends of color were honest with me about how my silence made them feel, how they were in pain and the absence of visual and verbal support from white friends was making it worse. I realized that my fear of saying the wrong thing was sending a message that I didn’t care about Black boys getting killed by police, so I’d better learn what to say and start saying it, if I wanted to be true to what I really felt inside. I started going to meetings with Showing Up for Racial Justice (SURJ) and I’ve been on a crash course to educate myself ever since, bringing my kids along with me as much as I can. I want them to be more aware of what’s going on in the world than I was growing up, and I want them to feel that we are on the right side of history, working to support the movement for Black lives.

We’ve participated together in rallies, marches, and vigils, attended workshops, and canvassed door-to-door with BLM yard signs in our town. We frequently talk about things that happen at school, on TV, and in the world through a lens of social justice, thanks to the support of some excellent teachers. They are outraged about police brutality and we have cried together watching the news. I know my kids support the message of Black Lives Matter, and if someone says “All Lives Matter,” they can recite the rain forest analogy or swap it up with the broken bone or breast cancer analogy, too, take your pick.

But the thought of wearing a BLM t-shirt to school? Um, no thanks. As my oldest explained, having a sign in front of the house is a decision an adult made about their own property, so the kids don’t feel like they bear the brunt of any negative reaction that might come of it. Wearing a t-shirt to school, though, they’re on their own. I get it, they are worried that maybe some of their friends won’t agree. Maybe some even (mistakenly) equate Black Lives Matter with I Hate Cops. They like their friends, they don’t want to ruin anything by talking about something controversial. Even though they know what to say, they worry they might say it wrong. I can totally relate.

But that’s the thing. We need to talk to our friends. It’s the people we care about, and the ones who care about us, who might actually listen. Each time I’ve had face-to-face conversations with people around these topics, I’ve been uncomfortable at first, but I’ve survived and come away with feedback about what I could say or do better the next time. Still, I can’t force it for my kids. I need to stay on this side of modeling the behavior that I hope to see, without creating something for them to rebel against. Don’t need to turn them into Trump supporters–or worse, assholes!

I recently took the day off of work to attend to some appointments for myself and my younger son. I told him I would be wearing my BLM shirt when I picked him up early from school and he said, “I’ll wear mine, too!” So we trekked between Oakland and San Leandro to Kaiser, the orthodontist, the dentist, the library, and back to the orthodontist. Everywhere we went, we got high fives, compliments, and questions about where to get the shirts. Personally, I was on the lookout for some ALMers we could talk to, but hopefully being out together and getting positive feedback will give my son the confidence to wear his BLM shirt alone. I think both of my boys will get there, but they’ve got to do it at their own pace, in their own time.

Photo Caption: Selfie of me and my son walking down the street in our Black Lives Matter t-shirts.

Wear Out The Silence is supported by Bay Area Showing Up for Racial Justice, an organization working to move white people into action for racial justice. For more information, please visit www.surjbayarea.org
Loading Comments...
%d bloggers like this: