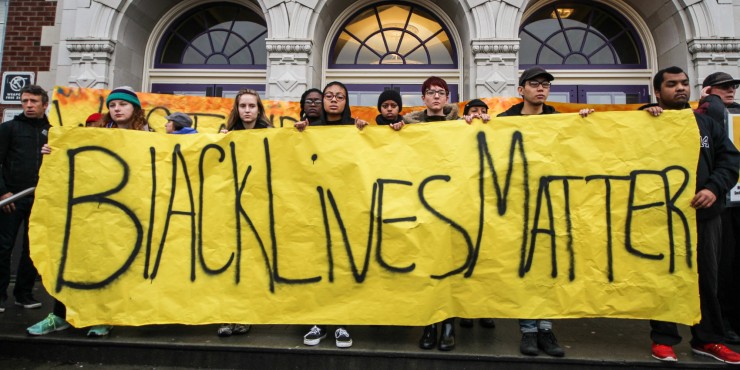 Fellow white people; if you, like me, are looking for ways to express your sorrow and outrage over the police shootings of black people and the systemic inequities that fail to keep police accountable; if you are looking for ways to “take a knee” and make visible and urgent that outrage; if you are looking to build your capacities to have meaningful conversations with your friends, children, neighbors and co-workers; if you are ready to move into action and be part of this beautiful black-led multiracial movement for justice, we welcome you.

Martin Luther King said, “Our lives begin to end the day that we become silent about things that matter.” Fifty years later, the silence we white people have learned to live with has become deafening. The impacts of racism hurt black people and other people of color in violent, shameful and awful ways. Our children see this. We saw it as children. We learned to swallow that awfulness, to perhaps even hate it, but ultimately, we learned to live with it in silence. But this is no passive silence, it is an active one and it has sustained the oppression of the black community for too long. This turning away, this lack of urgency, taught us, and teaches our white children generation after generation, that this is an issue about others. Not us. This fractures white people deep in the soul, reproduces white supremacy, and has hurt us in ways that we don’t even recognize. We have to stop this narrative at the root. We have to break the silence and say Black Lives Matter until we live in a country that honors, respects, and cherishes the value of black lives.

“Wear Out The Silence” is a campaign asking white people to wear Black Lives Matter t-shirts every Friday as a way for us to bring the racial-justice conversation deeper into our daily lives. We want to use these conversations to move more white people into action, and to make visible the many people supporting the Movement For Black Lives.

Fifty years ago, Stokely Carmichael asked, “Can white people move inside their own community and start tearing down racism where in fact it exists?”

Wearing a t-shirt is just a first step. But if it is a step towards breaking the silence that we have all learned to live with, take it. Now.

Other ways you can support this movement moment is to financially contribute to the on-the-ground organizing happening right now in Charlotte.

CLT QTPOC Coalition; for general support of organizing actions, including (but not limited to) banners, signs, supplies, food, water, camping supplies, medical supplies, cameras, portable phone chargers, and materials to construct an altar at the site of the murder.

The Freedom Fighter Bond Fund; a general fund sponsored by the Durham Solidarity Center that supports costs associated with direct action and protest across North Carolina, including bail and legal costs.

In Tulsa, following the police murder of Terence Crutcher, folks on the ground are asking for donations to be made to the family through this link: https://www.gofundme.com/crutchermemorial

Also, please consider joining SURJ, a national network of white people organizing other white people for racial justice. Check out the website and find a chapter organizing near you: http://www.showingupforracialjustice.org

You can buy union made Black Lives Matter t-shirts at www.wearoutthesilence.org. All proceeds from the sale of these t-shirts goes to support black-led organizing.

Wear Out The Silence is supported by Bay Area Showing Up for Racial Justice, an organization working to move white people into action for racial justice. For more information, please visit www.surjbayarea.org
%d bloggers like this: